Blog>Culture>What Are Museums for?: Chris Ofili at the New Museum
Culture

What Are Museums for?: Chris Ofili at the New Museum

A few weekends ago, I visited Chris Ofili’s “Night and Day” at the New Museum. I had the opportunity to view many dazzling and intricate large-scale pieces by the artist. Among the collection of varied, often impressive works sits one piece which sparked immense controversy, creating a “media storm” which drew international attention and sent ripples through the museum world. The controversy over “The Holy Virgin Mary” (pictured below), which features Ofili’s representation of a black Madonna incorporating elephant dung and pornographic images, raised a tremendously important and heady set of questions about freedom of expression, the purpose of public funding, the function of the arts, and the topic of censorship—questions which have far-reaching applications for the social and political climate, for art, philosophy, anthropology and of course, for cultural institutions like museums. 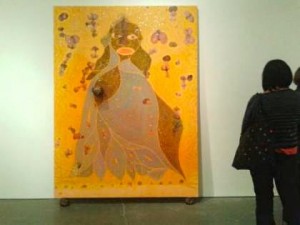 Many of you probably remember the scandal that erupted when Ofili’s “The Holy Virgin Mary” was first brought to the Brooklyn Museum in 1999 as part of an exhibition titled “Sensation,” which had previously appeared in Berlin and London.

It is interesting to note that the exhibition, as well as the art piece itself, was very well received in Berlin, and that visitors found the art to be “serious” rather than “irreverent.”

In London, some of the works in the show generated controversy (and unprecedented crowds), but it was not until the show reached the US that Ofili’s work took the spotlight and was outright banned. People were so incensed and offended that public funding to the host museum—a $7 million City Hall grant—was cut by Major Giuliani, who called Ofili’s work “sick stuff.”

Interestingly, Hillary Clinton, the NY Civil Liberties Union, and the editorial board of The NY Times all supported the museum and Ofili, and openly expressed concern that Giuliani’s decision threatened to initiate a new age of censorship that would run counter to the spirit of creativity and freedom of expression that drives innovation in art and culture.

People were so incensed and offended that public funding to the host museum was cut by Major Giuliani, who called Chris Ofili’s work “sick stuff.”

The decision to cut funding was reversed by a federal judge within a month, and she ordered that the city restore the City Hall grant and cease and desist with the process of forcing removal of the artwork.

So, was this a “triumph for art”? A “blow to religion”? Both? Neither? What about museums? What can this tell us about their place and function in society?

What are museums for?

Are they envelope-pushers? Receptacles for beautiful art? Legitimizers for criminals or perverts?

Do they have a duty to present us with the subversive—that which makes us uncomfortable, even offends our sensibilities by, for example, throwing together the sacred and the profane (stickers handed out by the Brooklyn Museum at the Sensation show stated that the pieces “may cause shock, vomiting, confusion, panic, euphoria and anxiety”)? And are they then shirking their responsibilities by choosing not to offend?

Does a museum shirk its responsibilities by choosing not to offend?

Or, conversely—is it a museum’s duty to please its funders or “the public” and thus avoid what might anger or offend?

In an extremely thoughtful article on museums and the public sphere, Brian Droitcour calls upon historical context to shed light on this issue: “Both museum and public sphere were born of bourgeois revolution—the museum quite literally; the first modern museum, the Louvre, was converted from a palace into a public collection of art by decree nine days after the French monarchy fell. Both acquired significance as vehicles of bourgeois ideology, a worldview that did not displace aristocratic tastes and values so much as it worked to make them available, to present them as a way of life that anyone could ­aspire to approximate.”

In choosing to host the Sensation exhibition, were museums such as the Brooklyn Museum actively challenging this notion of what they are and should be for? In this case, one might view the pushback from the mayor and his supporters as a demand to reinforce the position of museums as the mouthpiece and democratizer of aristocratic ideals, perpetuating the idea that they should only house what is recognized by that group as “the good,” “the beautiful” and “the pleasing.”

This whole line of questioning leads me to consider what public arts and culture-focused funds should be used to support, and eventually to such airy questions as “what is art?”

Many questions, few answers. Back to the museum I go.