Canadian Museum of Immigration at Pier 21

“You’ve really helped us separate the wheat from the chaff. And you’ve really helped me have that a-ha moment about the focus on the visitor. You have been endlessly helpful in exactly what you set out to do.”
Marie Chapman, CEO, Canadian Museum of Immigration at Pier 21

The Canadian Museum of Immigration at Pier 21, located in Halifax, Nova Scotia, is a national museum devoted to the history and impact of immigration in Canada. It’s located in a historic immigration shed on a pier in Halifax harbor, and it began as the Pier 21 Society: a research center focused on European immigration through Halifax in the 20th century. But in 2012, it became a national museum and assumed a much broader mandate. Over the next several years, the institution dramatically expanded its scope, developing new exhibitions that explored the immigration story nationwide and tripling the size of its staff.

• The museum has been remarkably successful in its expansion, but this period of rapid growth presented challenges as it would for any institution. A succinct description was hard to find once they had become a museum, a research center, a cultural tourism attraction, a historic site, and other things all at once. With a much larger staff came departmental divisions and difficulty in maintaining a cohesive culture. Longer-tenured staff from the Pier 21 Society days did not always share the vision of newer staff hired after the transition to a national museum.

• This lack of internal clarity was making it hard for outsiders to understand the museum’s mission. The legacy of the Pier 21 Society, and the location in Halifax harbor, prevented people from recognizing its broad focus on the national story. So the museum issued an RFP seeking outside help with cultural alignment and messaging clarity. 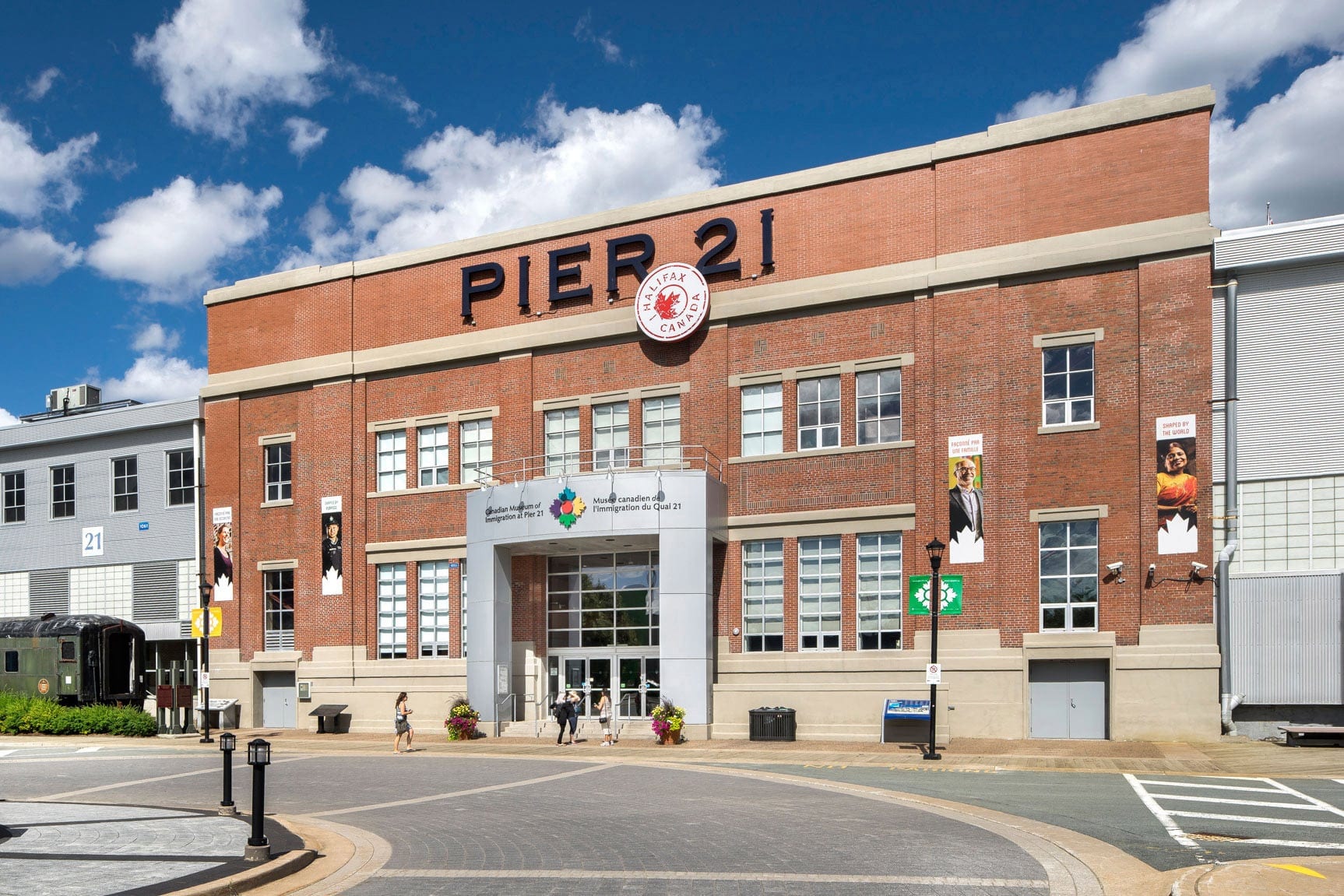 “Many agencies have come before and failed.” — Jennifer Sutherland, Vice President, Communications and Partnerships, Canadian Museum of Immigration at Pier 21

Workshop: We began with a Discovery Workshop in Halifax including a wide range of staff from all levels, including senior leadership, front-line staff, curatorial staff, and administrative staff. Here we developed the museum’s Brand Pyramid. In answering “What is the Canadian Museum of Immigration,” we immediately encountered the duality between the historic site and the modern national museum. Our final answer was “A gateway for all to discover the history and impact of immigration and our place in the ongoing story of Canada.” The “gateway” evokes Pier 21 as a physical space, while “ongoing story of Canada” reflects the breadth of the museum’s mission.

• The notion of being a “gateway” returned in our Brand Idea, at the top of the Brand Pyramid: “Gateway to Empathy.” This idea led to a strong debate which continues today. Most of the research and curatorial staff were resistant to it, finding it to be heavy-handed and overly suggestive of a political agenda. They preferred “understanding” to “empathy,” preferring a more traditional and academic alternative. But the front-line visitor experience staff argued strongly that while understanding would always be important, empathy was the better end goal. It would drive the creation of a more emotional and entertaining experience that would lead to greater impact for visitors.

• This issue is at the heart of what it means to be a museum. How should we balance the needs to educate and entertain? To be academic and objective but also emotional and engaging? Given that much of the museum’s visitorship is from out-of-town tourists, we decided that the museum needed to emphasize its status as a cultural tourism attraction and that empathy was a superior principle to understanding in pursuit of this goal.

Persona Interviews: We conducted qualitative research through persona interviews with two groups: parents from the Halifax area and empty-nester tourists from the Toronto area (where the majority of out-of-town visitors are from). Research strongly confirmed “Gateway to Empathy” as a resonant Brand Idea, and all but one interviewee agreed that empathy was a more impactful goal for the visitor experience.

• Research also uncovered a problem: the inaccurate perception that the museum is mainly focused on European immigration through Halifax. As expected, the name and location led some to doubt whether it would deliver on the mission of telling a national story. 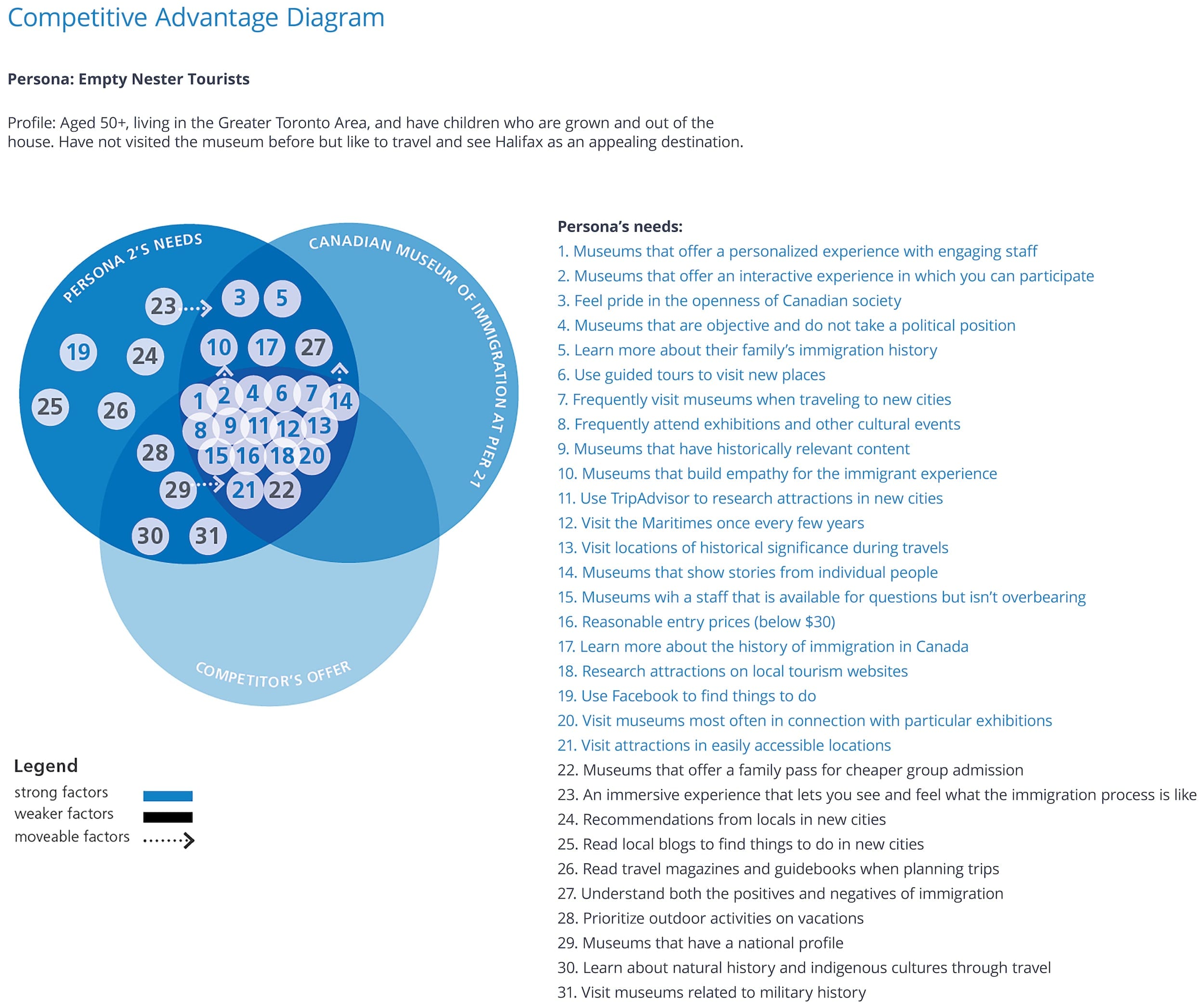 Strategy: Based on our Discovery and Research findings, we developed a Brand Positioning Statement for the museum that makes a promise that all staff can be excited to work together in fulfilling. It clearly describes the museum’s unique value proposition and its competitive position, mitigating the confusion that was hindering the development of a clear brand. We also turned the positioning statement into a more conversational and usable elevator speech that will aid staff in their description of the institution and help ensure that everyone is sharing the brand story in a consistent manner.

• Our findings strongly emphasized the need to de-emphasize the name “Pier 21” and focus on building a brand for the “Canadian Museum of Immigration” in its own right. This means staff must cease referring to the institution as Pier 21; it also implies changes in signage and other collateral.

Alignment: We returned to Halifax to lead all staff in workshops that helped define the relationship between the museum’s Core Values (developed in the Discovery phase) and everyone’s daily work. These workshops empowered staff to speak up about areas of improvement they saw and are helping to make the work environment more collaborative and productive.

“Everyone felt uncomfortable with parts of these conversations, but you can’t grow without that. Frankly I think we’ve come a long way. All of these pieces in thinking through how to be better as a team have been incredibly useful.” — Marie Chapman, CEO, Canadian Museum of Immigration at Pier 21

Tagline: The museum needed a memorable tagline that was able to tie the brand together in a emotional way. We were told that many agencies had tried to craft one that would stick and be embraced by staff; so far none had succeeded.

• Based on our understanding of the brand, the mission, and the content of the museum, we entered a brainstorming process based on the idea of capturing, at once, the national story and the individual stories that make it up. Our final option was unanimously endorsed: Countless Journeys, One Canada.

Advertising campaign concept: Based on this tagline and our strategy work, specifically the notion of empathy, we developed a campaign concept to inspire the museum’s marketing efforts. It is based on the idea that everyone is an immigrant in some fashion—whether they recognize it or not. It could be yourself, your mother, or your great-great-great grandfather. By challenging modern stereotypes around who is an immigrant, we can build a more empathetic and welcoming society.

“We would never have been able to do this if we didn’t go through this process. There’s no question in my mind. It has been really helpful in a big, big way.” — Marie Chapman, CEO, Canadian Museum of Immigration at Pier 21