Nobody reads ads. People read what interests them. Sometimes it’s an ad.

We launched the Free ad campaign for The Bronx Museum of the Arts this week as they announce to the world, and particularly to the Bronx, that they are going free to the public. 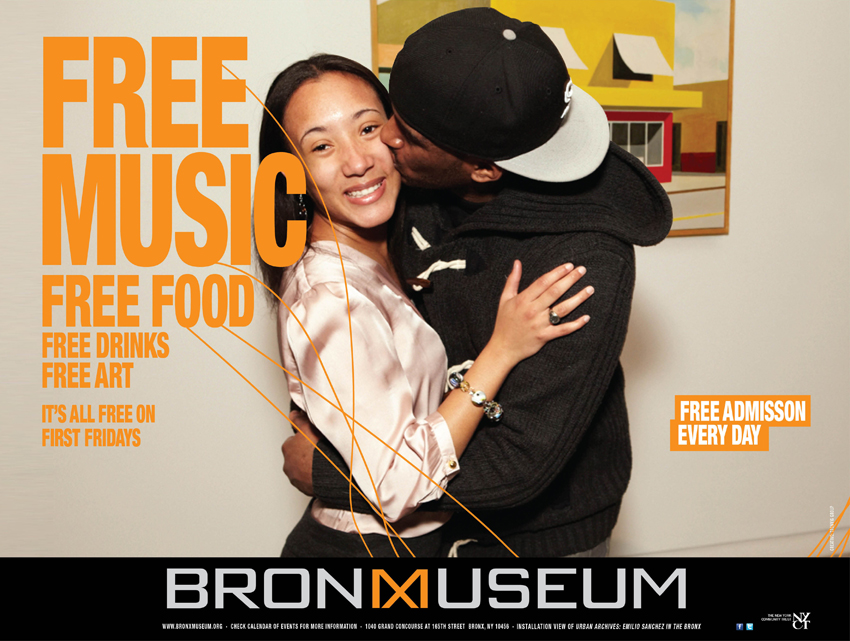 The campaign, sponsored by the New York Community Trust, has launched on bus shelters and subway stations throughout the Bronx. We also spruced up the front of the already spectacular Bronx Museum building with new signage so that passersby won’t miss the message.

Contrary to the escalating admission prices for arts institutions throughout the city, The Bronx Museum of the Arts, under the direction of Holly Block, has been able to make its contemporary art offerings and robust public and educational programs all free to the public.

Tronvig Group was asked to devise and execute a campaign directly addressing the Bronx public. We wanted ads with imagery that was authentic and engaging and with the help of photographer Tom Rauner, we photographed Bronx residents having fun at real Bronx Museum programs. We shot them posing for the camera—Facebook style—to make the imagery more approachable and familiar. We also put them clearly inside the museum with recognizable exhibited work behind them. (In this case the Bronx-themed paintings of Cuban-born artist Emilio Sanchez, who is on exhibit at the Bronx Museum through June 17, 2012.)

What’s important about these ads is that they are not simply showing what’s on display—as is typical of the genre—but feature WHO is inside.

What’s important about these ads is that they are not simply showing what’s on display—as is typical of the genre—but feature WHO is inside, and the who in this case are everyday people: the general Bronx public. By photographing residents of the Bronx inside the museum having fun, we are working to visually escort viewers though the front doors. Museums—especially contemporary art museums—can be intimidating for the uninitiated, and by working to take the mystery out of the experience we hope to make it more inviting generally: “Hey, that could be me. It looks like fun.”

So, not only are we announcing that the Bronx Museum is free, but also that YOU should come on in because this is a place where you can feel at home and have fun. Museum advertising often speaks primarily to the converted. This is an attempt to start up a conversation with museum virgins by way of a heartfelt call to attention.

Beyond the visual treatment we also address this same audience with a headline that features the perks of attending some of the Bronx Museum’s most popular public programs, like First Fridays, where there is music, food, drinks, and of course art … and it’s all free. This is an offer designed to appeal to anyone.

See you in the Bronx.

One year later: This campaign—combined with the efforts of the Bronx Museum to remain persistently relevant to the people who live in the Bronx—has doubled the museum’s attendance for the year as noted in the New York Times.