We have had to create a few historical game characters for museum games targeted at children. Along the way, we have acquired some insights that may be useful to others doing the same or similar things.

As part of Dutch New York, an in-class game we created for the New-York Historical Society’s DiMenna Children’s History Musuem, we had the opportunity to do a good bit of testing of the illustrations with target age kids. 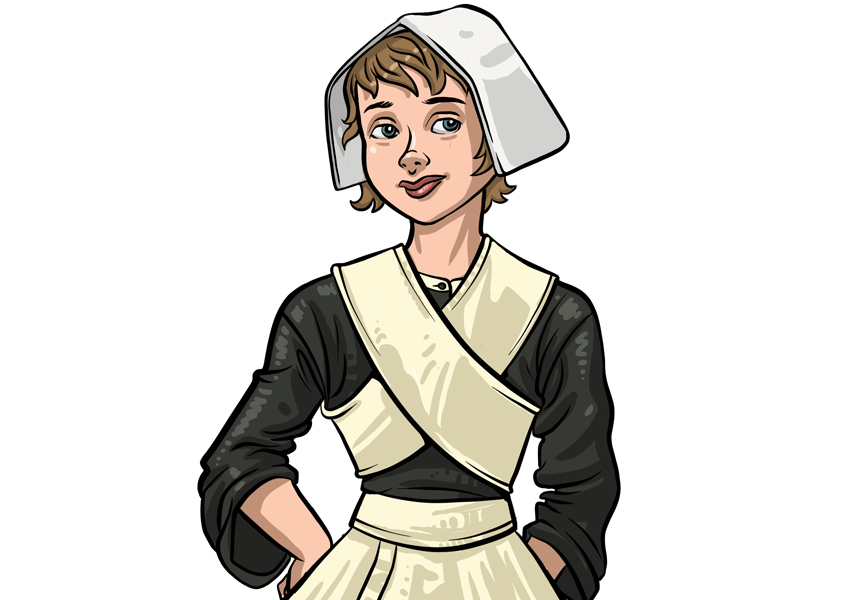 As a general note—and contrary to what you might expect if you’ve spent any time on the Cartoon Network—the kids were surprisingly opinionated about how these historical characters should look and dress.

It’s hard to make a generalization from the sample we have, but some of the comments and suggestions we got from kids should be of interest, if for nothing else than to demonstrate that if you really want to know if it’s good, ASK THE KIDS. Let me say that another way: if you are doing a game for kids, involve them as early as you can, and get their insights as often as you are able.

If you really want to know if it’s good, ask the kids.

In Dutch New York we wanted to create 5 historical or historically based characters who lived or would have lived in New Amsterdam colony. The historical game characters each tell their own story and give a different perspective on what life was like at that time.

One of the historical game characters we needed to create for the game was a freed slave. The kids had strong opinions about this character and the critique came from kids of varying ethnicity. He started out looking like the character on the far left, and this got a harsh veto from the kids. He did not pass muster until he looked like the full-color version you see in the middle. The view seemed to be that his original incarnation was not dignified enough. They also had issues with the wrinkles around his eyes. In the end, however, we dropped him from the game and developed the historically documented Dorothy Creole instead (far right). Her character illustration was an immediate hit with the kids. You can hear her haunting story of life in the colony in Dutch New York. 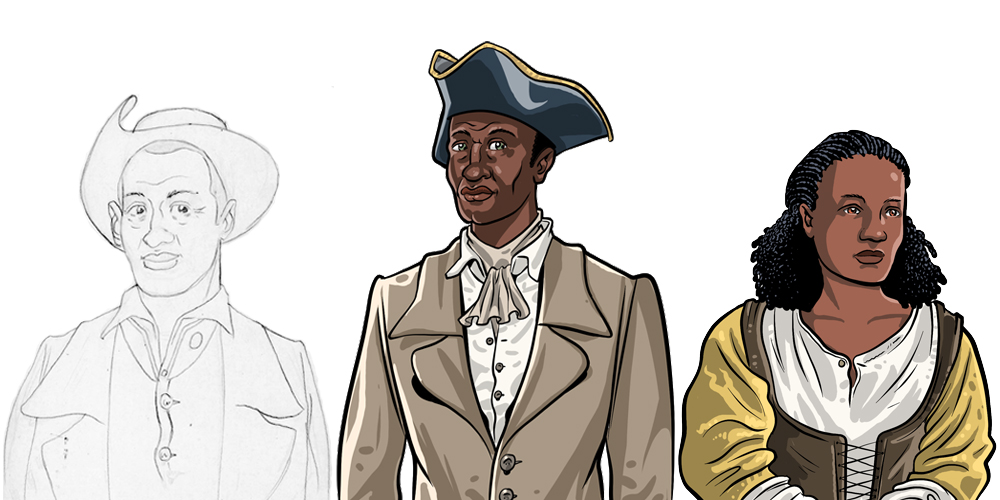 We also created Peter Stuyvesant based on his famous portrait from the New-York Historical Society collection. We had no problems there. His brand is seemingly firmly established and unassailable. Even for the kids, that’s just what he looked like. What’s to complain about? The “Lenape Leader” also got only high fives. I’m not sure I understand why here, but perhaps this is because he is in violation of no expectations. The kids seem to be comfortable with stereotypes—the dignified former slave and the “noble savage.” This is a challenge to work with and around, of course. 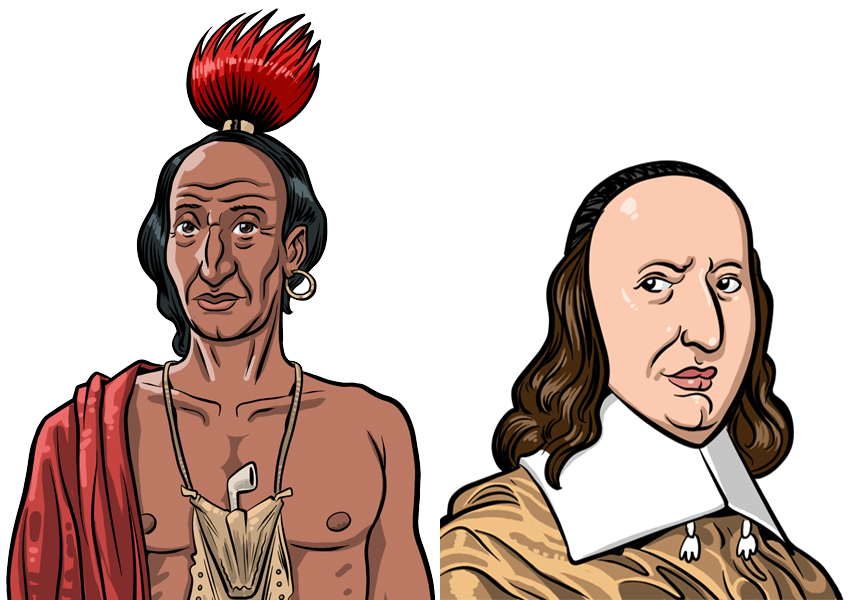 The target was 7 to 12, and we were testing within the whole age range. Our 15-year-old Dutch kitchen maid (left) passed the test, but the much older matron of Midwood, Margrieta van Varick, was criticized for having too many wrinkles around her eyes and being too plain. It seems she needed to be brought closer to Hollywood norms for what a middle-aged woman is supposed to look like. She started as in the sketch on the left and, kicking and screaming, ended up as shown in the color version on the right—Michelle Pfeiffer in a bonnet. Joanne, her pre-teen girl, drew no criticism. 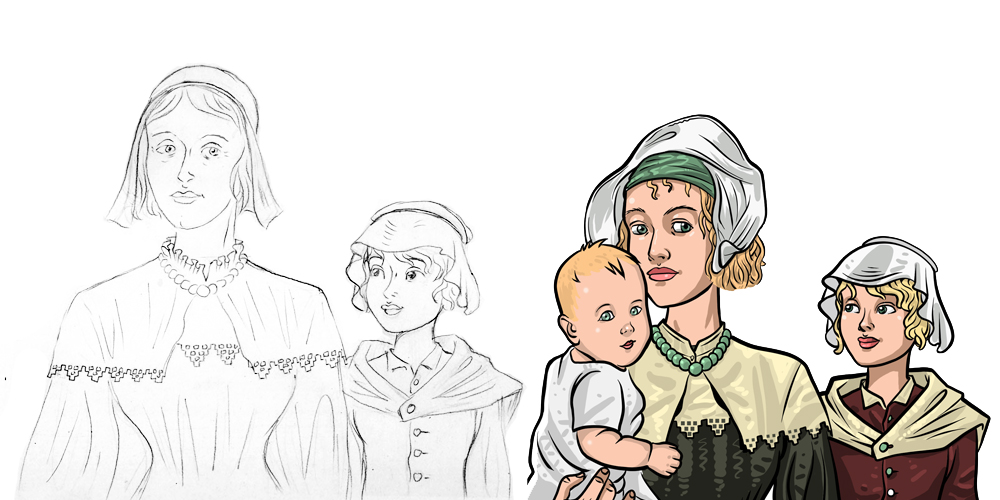 We also had a lot of trouble with Juan Rodriguez. For some reason he inspired a lot of very specific changes. He started here and got a lot of flack for his facial features, especially the size of his nose and style of facial hair. He ended up as shown in color on the right. And then, sadly, had to be dropped from the game altogether because too many facts from his story were in historical dispute. Bye Juan. 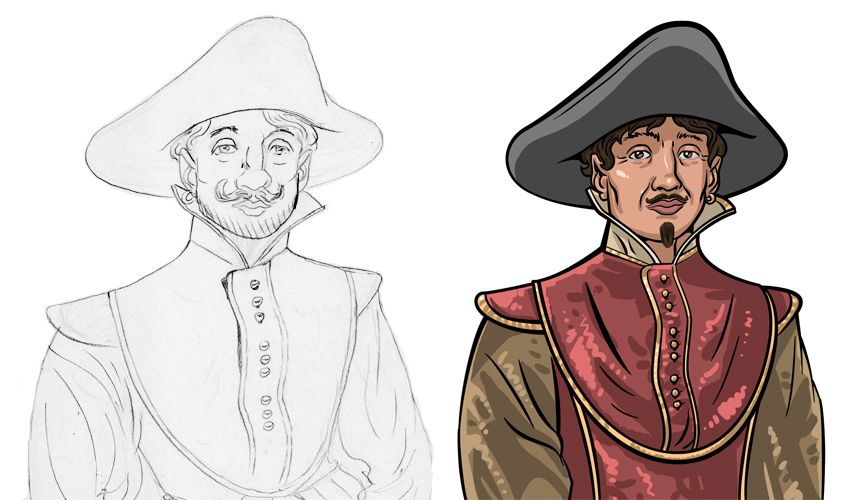 Here are some other recent characters for a game currently in development for the Morris-Jumel Mansion:

This is the young Revolutionary War General George Washington, whom you may not recognize when illustrated with fidelity for this 1776 portrait from the Brooklyn Museum.

Our version of a patriot nurse, Sarah Dixon (middle), who followed her brother to the battlefield in the revolutionary Battle of Harlem Heights; Robert Warder (left), a tough young British soldier; Charles Foster (right), a young American patriot.

Not for that game, but we also created Alexander Hamilton and the mid-19th century Dr. James McCune Smith. 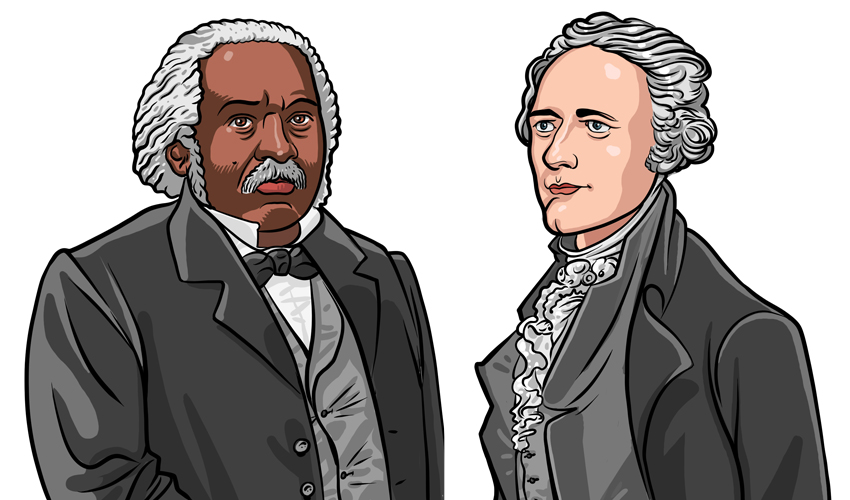 We hope you enjoyed looking at these historical game characters as much as we enjoyed illustrating them. 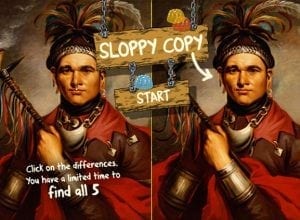 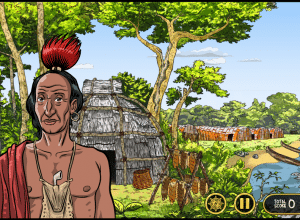 Advertising & Marketing
Historical Game Characters for Museums
By James Heaton / Jul 11, 2012
We have had to create a few historical game characters for games targeted at kids. Along the way we have acquired some insights that may be useful to others doing the same or similar things.
read more →