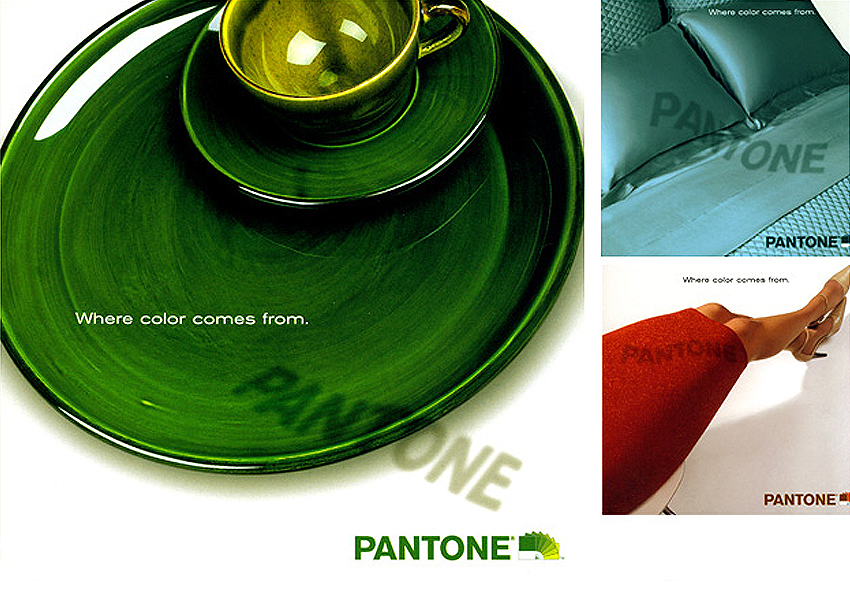 Pantone became a color company in 1962 and has since become synonymous with color and color trends. We worked with them in the early 2000s just as they were making the transition from being a resource for graphic designers and printers into being a color company with offerings in fashion and home as well. These ads were done in collaboration with Mixed Business back in 2000 (when that company was known as Balet and Albert).

The shot of the skirt was particularly fun since the model was none other than Lisa Herbert, daughter of Pantone Founder Lawrence Herbert, whom we shot in the Mixed Business offices on Cooper Square. There was not much retouching required for the ad, not only because she had great legs, but because the whole office was almost entirely white.

One could certainly argue that color comes from our mind and not from Pantone, but that was besides the point. The ads—developed under the creative direction of Marc Balet—did the job they were commissioned to do.

Beyond that and more importantly, working with Pantone was a deeply rewarding experience. They made a significant effort to indoctrinate all of their partners in the Pantone philosophy. This involved conveying their love of precision and process, as well as communicating the inner workings of how they were able to connect the science of color with a passion for how color was and needed to be an integral part of our lives. They were almost evangelical about these things. I learned a great deal from my frequent excursions to their Carlstadt, NJ headquarters.

You cannot connect the dots looking forward in your life. You can only do so looking back.

More generally, I will note that this is one of the greatest rewards of working in this business. You are always learning. Working for nearly two years with Pantone taught me much of what I know about color and this has served me very well in all the years since.

As Steve Jobs points out in his 2005 Stanford University commencement address, you cannot connect the dots looking forward in your life. You can only do so looking back. You never know at the time how your life trajectory will play into and inform what you end up being able to accomplish.

Advertising in the Facebook Age: Bronx Museum Free Campaign
By James Heaton / Mar 29, 2012
We launched the Free advertising campaign for the Bronx Museum as they announced to the world, and particularly to the Bronx, that they would go free to the public. Museum advertising often speaks primarily to the converted. This was an attempt to start up a conversation with museum virgins.
read more →