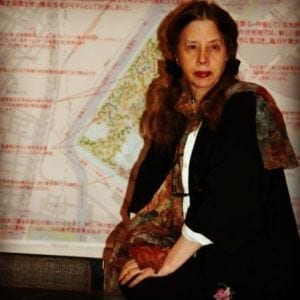 I loved that she was not going to die.

Madeline loved me. I felt this as a wet-nosed 25-year-old boy just arriving in New York. Madeline was the first to take me under her creative wing and give much needed guidance. Arakawa—her great life partner—too, but it was really Madeline who trusted me, for reasons known only to her, with real and important responsibilities. It was Madeline who forced me to become more than I was. It was Madeline who made me face up to my potential. This was one of her many gifts. A gift given to all who ever worked with her.

As a result, Madeline stole my then adolescent mind only to give it back to me later (much fuller and more flexible), but she also stole my heart and never gave it back.

M
a
d
e
l
i
n
e
and Arakawa always opened everything. They opened their home. Opened the nature of experience. They opened our young minds to the worlds they were exposing, to the almost childlike joy they took in our life on earth, to the act of perception, to their bold and ever-becoming enterprise of Reversible Destiny.

Madeline Gins, I do not say goodbye today. I only say thank you. Thank you for everything.

A note and follow-up on the Bioscleave House video above

In response to Madeline’s suggestion, “if the three of you can show me other ways that helps you, that would be nice, because I’ll put it right in my proposal” my kids proceed to orchestrate an impromptu music making session using the outer walls of the Bioscleave House.

She can be seen briefly in the following clip, fully there with the kids making a merry noise. And perhaps you can also see, at the end of the clip, how the place is filling them with life, even as they do not fully understand how.

For a quick gloss on Madeline, here is her bio from Architizer and also their homage to her and her work. Also, here a rather unemotional New York Times and an article on the work of Madeline Gins and Arakawa from the New York Times Style Magazine.

I fondly remember working with her far beyond my capacity but with particular intensity on Helen Keller or Arakawa.

Blog
Arakawa + Madeline Gins
By James Heaton / May 19, 2010
Arakawa Shusaku — July 6, 1936 - May 18, 2010.
It was 1991, and I was fresh from Japan, adrift in New York, and uncertain of my destiny. It was Madeline and Arakawa who found me (especially Madeline). They took me in, fed and nourished me with scraps of wisdom—and curry—from the kingdom of intellectual freedom in which they habitually dwelt.